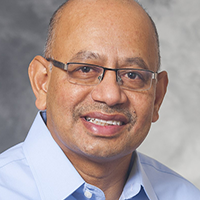 Role of Endoplasmic Reticulum Stress after Tramatic Brain Injury
Traumatic brain injury (TBI) is one of the leading causes of death and disability, worldwide. TBI leads to multiple, distinct overlapping cell signaling pathways which may regulates either cell survival/damage. Consistent with the role of ER stress in many pathophysiological conditions of the brain, we are focusing to study the effect of ER stress in the progression of secondary brain damage after TBI. Our long-term goal includes the inhibition of ER stress in combination with Oxidative stress, one of the major modes of cell death. Thus, our studies may help in elucidating the mechanisms underlying the TBI and may further help in establishing a possible ER targeted therapeutic strategies in combination with the oxidative stress in the treatment of TBI.

Role of ISG15 after Cerebral Ischemia
Interferon Stimulated Gene-15 (ISG15), a 17-kDa ubiquitin-like molecule, contains two ubiquitin domains, including a carboxy-terminal LRLRGG motif, through which it forms conjugates with target proteins, a process known as ISGylation (Lai et al. 2009). Activation of this pathway results in the conjugation of ISG15 to over 100 known target proteins that may plays a major role in the regulation of multiple biological pathways. Our preliminary data suggested that cerebral ischemia/reperfusion injury results in increased ISGylation of high molecular weight proteins in the cortex and striatum of rats. Currently, we are studying the effect of ISGylation after focal cerebral ischemia in the mice lacking ISG15, which may provide a better insight to establish therapeutic strategies aiming at stroke. Lai C, Struckhoff JJ, Schneider J, Martinez-Sobrido L, Wolff T, García-Sastre A, Zhang DE, Lenschow DJ (2009) Mice lacking the ISG15 E1 enzyme UbE1L demonstrate increased susceptibility to both mouse-adapted and non-mouse-adapted influenza B virus infection. J Virol. 1147–1151

Role of MicroRNAs in Cerebral Ischemia
MicroRNAs are 18-25 nucleotide-long, non-coding RNAs that control cellular function by either degrading cellular RNA or arresting their translation. Recently we have shown that a number of microRNAs are up-regulated and down-regulated during transient focal ischemia in the adult rodent brain (Dharap et al., 2009). Currently, we are studying the role of these altered microRNAs in the post-ischemic pathophysiological cascade, identifying their targets and exploring the influence of epigenetic mechanisms on their expression patterns. Ultimately, our studies aim to provide a fresh insight into the cellular and molecular mechanisms of an ischemic stroke, and identify potential targets for pharmacological therapy.

JAK-STAT-SOCS signaling in post-ischemic cerebral inflammation
When induced, SOCS family of proteins controls cytokine production by negative feedback regulation of JAK-STAT pathways. We observed increased expression of SOCS3 and activation of STAT3 in the post-ischemic brain. As cytokines promote inflammation and neuronal damage, we are evaluating the mechanism of action of ischemia-induced SOCS3 by using antisense, RNAi and adenoviral vectors. To identify the complete complement of genes down-stream to SOCS3 signaling, we are conducting GeneChip analysis following knockdown and overexpression of specific proteins of SOCS/STAT pathway.

Role of transcription factors Egr1 and C/EBPß in cerebral inflammation
The molecular mechanisms of inflammatory progression in brain are not well understood. We observed increased expression of the transcription factors Egr1 and C-EBPß after focal ischemia and hypothesize that these two start the pro-inflammatory cascades in brain. We are currently analyzing the functional significance, down-stream effectors and the interactive mechanism of action of Egr1 and C-EBPß in controlling the post-ischemic cerebral inflammation using knockout mice, adenoviruses and antisense.

Therapeutic potential of PPAR-g agonists in controlling cerebral inflammation
PPAR are ligand-activated transcription factors known to control lipid metabolism, glucose metabolism and inflammation. Thiozolinediones rosiglitazone and pioglitazone acts as potent exogenous agonists of PPAR-g and we are currently trying to understand if these compounds minimize cerebral inflammation following stroke and if yes, what is their molecular mechanism of action.