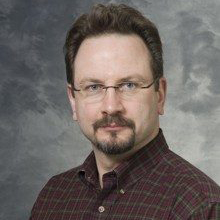 We are interested in understanding how the cytoskeleton is regulated in the developing and adult nervous systems. The cytoskeleton is composed of dynamic protein polymers that give cells shape, allow cells to divide, traffic intracellular components, and are instrumental for cell motility. In neurons the cytoskeleton is composed of filamentous actin (f-actin), microtubules and neurofilaments. We focus on microtubules and f-actin (see figure below). Although the name cytoskeleton suggests that these are stable polymers that act as struts or tracks, they are anything but static. Microtubules and actin filaments have the amazing ability to polymerize and depolymerize rapidly, which allows cells to quickly respond to the their environment. Our working hypothesis is that f-actin/microtubule interactions serve crucial roles throughout both axonal and dendritic development. These two cytoskeletal polymers appear to coordinate their dynamics, resulting in important developmental changes in the neuron, such as neuritogenesis, axon outgrowth, branching and growth cone guidance. The coordination of actin/microtubule dynamics is mediated by a myriad of microtubule- and actin-associated proteins.